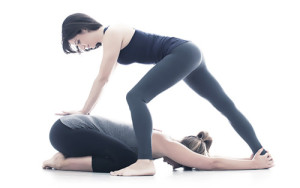 Yoga in the Indian tradition is a collection of various spiritual and physical practices developed in different directions of Hinduism and Buddhism schools for controlling mental, energetic and physiological functions of the body in order to achieve a certain mental and spiritual state. Outside India, the term “yoga” primarily associated with Hatha Yoga, its asanas and pranayama. On the basis of hatha yoga was developed as a fitness and yoga yogaterapiya.
The main and important difference yogaterapii of yoga is that doing yoga, we set ourselves above all the spiritual realization and development of certain qualities of body and mind, and only then to the promotion of health. Yogaterapiya deals exclusively with health improvement.
Yogaterapiya – a kind of alternative medicine and a special area in the practice of yoga, which puts the task of treatment of various diseases by means of yogic exercises.
Yogaterapiya – a set of exercises (dynamic movements, postures and breathing techniques) designed to improve the condition of the body, internal organs, respiratory, digestive and circulatory systems, harmonization of psycho-emotional sphere, increasing adaptation and resilience to stressful situations. Yogaterapiya can be used as an independent method, as well as an auxiliary in combination with conventional (allopathic) medicine.
In yogaterapii can distinguish the direction accent therapeutic effect:
1) Biomechanical effects – effects on the musculoskeletal system, improving flexibility and strengthening muscles and ligaments.
2) Physiological effect – effect on the autonomic nervous system, the cardiovascular system, and internal organs, the metabolism.
3) Psycho-emotional effect – harmonization of the higher nervous system and mental sphere, improvement of mood, intellectual ability, memory, concentration and performance.

It is important to remember that as with any treatment yogaterapiya has both readings, and a number of contraindications. So before you start developing yogaterapii – you should consult with your doctor.
When yoga is also important to consider the factor that you should not force the lessons quickly as possible when a rush to get a lot of injuries of ligaments and tendons, while the problem with the intervertebral disk can make the situation worse if practicing asanas without proper preparation. Getting into yoga should be slow and gradual, and must also take into account the initial state of health and sports training of the practitioner. Just do not be absolutized advice on nutrition and lifestyle, which were given in India for Hindus, as they were intended for people in hot climates with their slow pace of life, and in the cold European climate and the intense pace of life, these recommendations may not be entirely adequate and constructive. For the European climate more suitable recommendations of Tibetan or Chinese medicine to the individual needs of the individual. In Tibetan medicine is also used by some yogic exercises, as an auxiliary method.