From the proper landing at the wheel depends on comfort, health and safety of the driver. Fatigue, pain in the neck and back, numb hands and feet – a criterion that your car seat is adjusted properly. Often after long journeys driver turns for help to a neurologist, orthopedist or chiropractor.

Most drivers sit too close to the steering wheel. This situation constrains freedom of action and does not react quickly in an emergency. Another common mistake – driving a car in a semi-recumbent position (strongly leaning back). Sometimes in the summer you can see the drivers traveling with his elbow sticking out of the window – Sit with your elbow up to the window is missing. When the seat is pushed too far forward, the driver has much to bend his arms and legs that interferes in a position to easily move his arms and leads to fatigue and discomfort. This is particularly evident on long journeys, as in this case, due to the long sub-optimal static forces overstretched muscles of the back and neck. Long asymmetrical loads are a common cause of pain syndromes. When placing the seat is too far away – the driver has to catch up ahead, holding the handlebars. However, his back is unsupported and her muscles tense all the time. The main burden falls on the relatively weak arm muscles. In such a situation deteriorate accuracy and speed control actions, as well as visibility.

Correct driving position behind the wheel 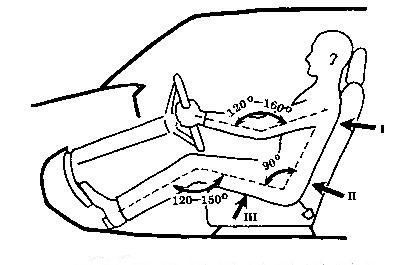 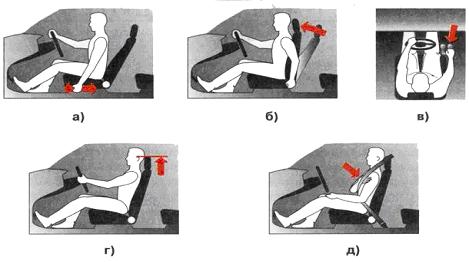 The optimal landing depends on growth driver and the length of his arms and legs. The rational behind the wheel fit not only ensures comfort for the driver, it is necessary for competent driving. Proper planting is characterized by the stable position of the body, the limbs of withholding exemption postures to perform the movements associated with the management. These provisions provide the most accurate driving, are most suitable for performing tricks and part of the “posture of readiness” to act in dangerous traffic situations. Properly seated in the car-racing drivers use rallisty. The driver of the car will feel comfortable behind the wheel when his hands are located in the middle position on the rim of the steering wheel slightly bent at the elbows, shoulders rest against the seat back and the leg in the hip area has a support on the seat. Thus midfoot right and left legs to pedal freely take out the entire range of movement of the latter. Sitting behind the wheel of need so that the back was almost flat, the backrest angle of 90-100 degrees, and Mezhuyev the knee joint and the edge of the palm rest away. The center of gravity must be located on the seat and not be on the weight. Straightened back and neck contribute to better coordination and orientation in space. You must pick a distance to the pedals so that legs were almost straightened by pressing the pedal to the end, but in the knee joints full extension should not be. 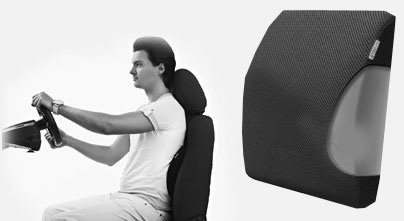 If you are not comfortable seat – use a small pillow just above the sacrum at the lumbar. When traveling long distances – make a break every 1-2 hours to avoid tensing your muscles and ligaments from static positions. Correct (a) and abnormal (b and c) the driving position behind the wheel of a car.  Avoid prolonged stay in asymmetric postures while driving