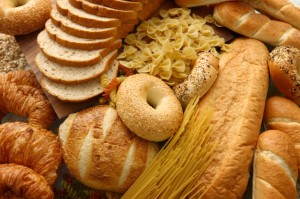 Gluten or gluten – a protein complex, which adheres to the same group of other proteins. Gluten contained in different cereals (wheat, oats, barley). It gives elasticity products, as well as used as a filler in the manufacture of a plurality of kinds of food. He makes a soft texture, enhances the flavor, acts as a preservative.
The danger is gluten for people with celiac disease (gluten intolerance). Its prevalence sostyavalyaet 1% of the population (that is, 1 out of 100 people suffering from this disease). The immune system of the patient begins to battle with the protein, which is determined by the body as a dangerous and alien element. Intolerance to varying degrees, and can manifest as nausea, bloating, indigestion, vomiting.
In children suffering from this disease, characterized by damage to the small intestine, these symptoms add to the exhaustion, anemia, retarded development. Shit goal of treatment – excluded from the diet foods that contain gluten. That is to comply with a gluten-free diet. But lately, this power is not only adhere to those who present symptoms of gluten intolerance, but also those who want to lose weight (that is, the rejection of flour and sweet), organize the work of the gastrointestinal tract. After all, a protein found in cereals (rye, wheat), or rather, its particles moving through the small intestine can damage the villi on the surface of the mucous membrane. The villi also help to promote food through the intestine and contribute to its assimilation. Eliminating from your diet foods that contain gluten, the villi are strengthened and, as a consequence, normalizes gastrointestinal tract.

The essence of the diet is to ban the eating of such products, which is present in the composition of wheat, rye, oats, barley, as starch, which is part of the sausage and dairy products, tomato sauce, juices, cereals and sweets (may contain an extract malt).

But it is important to consider that the rejection of cereals containing gluten, also means the elimination of the ration essential sources of certain vitamins and minerals. In humans, following a gluten-free diet, may lack certain nutrients in their diet. Therefore it is recommended to fill the dietary intake of vitamin preparations.

If the person does not suffer from celiac disease, the antiglyutenovaya diet for him does not matter, as gluten is harmful depends on the dosage. If too much gluten, it will encapsulate the intestine, leading to difficulty of digestion and absorption of food nutrients, which in turn will lead to the formation vzbrazhivaniyu flatulence and inner light intoxication. If products containing gluten consumed in small quantities and is not constant, then the person is not suffering from celiac disease it will not cause any health problems. Just eat better cereal and of durum flour. What is important is the principle of avoiding extremes (not chase fashion trends), and if there is no urgent need for strict antiglyutenovoy diet, the consumption of gluten simply cut.