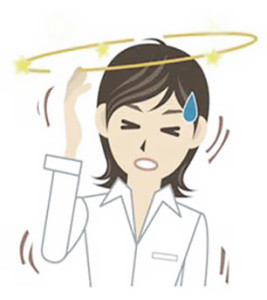 Dizziness is a frequent complaint of patients, which can occur in various diseases that have different nature (pathology of nervous system structures, a psychological disorder, abnormality of the inner ear, stem ophthalmic and oculo-motor disorders, diseases of the cardiovascular system or blood, fatigue).

Dizziness – this is quite a subjective feeling of loss of balance, uncertainty of spatial position of the body or rotation of objects, the attack of General weakness, which is not easy to differentiate the cause of these complaints.

Dizziness (vertigo) neurological nature can be divided into Central and the peripheral.

the Peripheral vertigo:
1) pathology of the vestibular nerve (the portion predverno cranial nerve) occurs as a consequence of infectious or discirculation neuropathy, with demyelinating processes or tumors of the cerebellopontine angle;
2) pathology of the structures of the inner ear (labyrinthitis, Miniere disease, benign positional vertigo).

vertigo (true vertigo) – the defeat of the vestibular apparatus or one of its systems (vestibular, visual or neuromuscular). This type of dizziness requires a thorough diagnosis. With vertigo the patient feels the rotation of his body and surrounding objects in the same plane; accompanied by nystagmus and vegetative symptoms, nausea, and in some cases disorder of motor coordination of the limbs.

non-systemic dizziness:
1) physiological, which can be fatigue, stress, hunger, untrained vestibular apparatus, motion sickness. This type of dizziness does not require treatment;
2) pathological – presyncopal status (orthostatic hypotension, diseases of the cardiovascular system, hidden bleeding or blood disorders), somatogenically caused autonomic crises (endocrine pathology, autonomic dysfunction is the result of diseases of internal organs). When non-systemic vertigo, the patient feels instability, feeling of falling, weakness, blackouts, vegetative symptoms as a reaction to the recurrence of symptoms can be a feeling of fear.

disequilibrium (ataxia) can have many causes: such as the defeat of a worm of the cerebellum, impaired neural connections between the frontal lobes and cerebellum, pathology pathways of the spinal cord, polyneuropathy of the lower extremities with impaired sense of support. The ataxia must be differentiated from orthopaedic pathology, leading to poor stability because of deformity, pain and stiffness in the lower extremities.

Psychogenic dizziness (pseudo vertigo) develops in the structure of psychosomatic, depressive, panic or anxiety disorders. This type of pseudo-vertigo is accompanied by strong emotions, anxiety, fear of falling, feeling of faintness, General weakness, feeling of “fog” in my head.

as should be in a separate cervicogenic dizziness. the Cervicogenic dizziness (cervical vertigo) is caused by irritation of the sympathetic plexus of the back of the neck with subsequent reflex vascular reaction, and also due to the imbalance of proprioreceptive impulses from the vertebrae and neck muscles to visual and vestibular afferentation related to the position of the head. This type of dizziness occurs with the pathology of the cervical spine and cause pain in the neck and limitation of movement in the cervical spine.

Given the variety of causes of vertigo, as well as different forecasts of the probability of recovery or the severity of the disease in view of the different nature of reasons themselves, if you have any complaints on dizziness should seek help from a doctor. Given the frequency of dizziness with neurological disorders, examination of dizziness should start with a consultation with a medical neurologist, and if the neurologist considers it necessary, it may further recommend consultation with a cardiologist, otolaryngologist, ophthalmologist, prescribe blood tests, an MRI study of the blood vessels, if necessary – consultation of psychologist.
Neurological causes of dizziness treatment involved neurologist.

as should be in a separate group of vertigo in the structure of somatic dysfunction that may be due to genialnyh violations, in particular the strain (the strain with fixation) in occipital, the spheno-basilar synchondrosis the, the pyramid of the temporal bone or Tentorium of the cerebellum. In this type of dizziness will be effective mainly osteopathy.
Cervicogenic dizziness can be attributed both to the category of neurological diagnoses and in the somatic dysfunction section. In cervicogenic vertigo and some types of non-systemic physiological vertigo would be just as effective osteopathy as the primary method of treatment for this type of dizziness. In other types of dizziness osteopathy can help, but in this case it is more constructive to use it as an auxiliary method.

« Our memory: how it works
About insomnia and sleep deprivation »